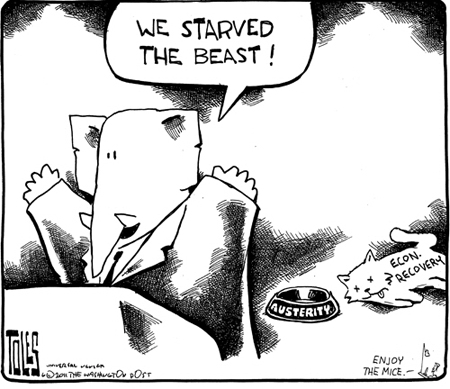 What is “The Beast”, and How to Starve It

Starve the beast is the long running small government belief of the GOP that if you deprive the government of tax revenue, it will be forced to cut spending.

This theory has generally been disproven–despite concerns about “socialism”, social programs tend to be popular once enacted. Instead of starving the beast, when taxes are cut the deficit and national debt get larger as “the beast” continues to grow.

So what is a small government ideologue to do? How can one starve the beast in such a world?

Unlike the Federal government (the main “beast”), most state and local governments cannot run deficits. They are designed to have balanced budgets, which can be a problem when projected tax revenues fall short and expenses unexpectedly rise (like, say, during a once in a lifetime pandemic).

Congress must pass some sort of meaningful state and local government aid package. These governments employ about 13% of all payroll workers in the country. Many of the public servants they employ work jobs providing a broad array social services to the least well off, and their budgets fund non-profits that do the same. They pay for first responders, teachers and schooling, not to mention all the extra costs associated with safely getting kids back in the classroom whenever that happens.

Don’t give me that tired line about “bailing out” mismanaged states. With careful wording Congress can address legitimate needs without bailing out states from any pre-COVID budgetary issues; it is ideology and partisan saber rattling holding back this aid, not any concern for economic justice or moral hazard. The economic recovery will lag, and poverty will be exacerbated, if state and local governments slash their payrolls and services at a time when both are needed more than ever.

Another way to “starve the beast” is to go after programs that are funded through specific “trust funds”, like Social Security and Medicare. These programs are funded through payroll taxes, so cutting the payroll tax could effectively starve that portion of the beast. Even though it likely wouldn’t lead to cuts to these popular programs, the legislative fight to reallocate money for them would present the GOP with an opportunity to push for cuts to other important programs.

So where do we find ourselves now? In the middle of a manufactured fiscal crisis on top of a terrible recession and pandemic. The Democrats passed a bill 3 months ago in preparation for this, but the GOP has neither passed a bill nor negotiated from the Democrats starting point.

So what was the GOPs response? First, to wait until the last second to even try to start developing out a solution. Then to balk at providing state and local governments the aid they need, despite decades of empty rhetoric about how state governments are best positioned to meet the needs of their people. From the Trump administration the plan is to suspend the payroll tax that funds Social Security and Medicare (an idea he’s been floating since March that no one in his own party even wants), and further strain state budgets by asking them to foot part of enhanced UI benefits.

Taken together the GOPs plan was to cynically try to blame the Democrats for not having a deal in place, while starving whatever “beasts” they could.

The corona virus has brought the structural inequalities of America to the forefront. Poorer people and persons of color were more likely to lose their jobs and be exposed to and die from the disease due to interrelated factors such as occupation, income, wealth, underlying health conditions and access to medical care.

People have rightfully been critical of the Trump administration’s response to the corona virus, but these issues are different in that they all predate the pandemic. In order to address them, two things are needed:

As the past few months have laid bare, a lot of work remains to be done. As comedian John Oliver put it:

“There is no better argument for a permanent welfare state then watching the government desperately trying to build one when it’s already too late. Because make no mistake, the real test here isn’t whether or not our country will get through this, it will. The question is how we get through this, and what kind of country we want to be on the other side…”

Trying to build an adequate safety net from scratch has led to some truly remarkable inefficiencies in our response, from unemployment claim backlogs to small business and hospital aid flowing to undeserving wealthy interests, to outright fraud. In other words, America paid a premium for slapping things together at the last second.

Creating a more just economic system is a more difficult undertaking, but ultimately even more important. In addition to creating a fairer society, getting that right would lead to more long term economic growth as a larger pool of innovators and entrepreneurs reach their potential. It would also lead to savings in our criminal justice system, poverty reduction efforts, mental healthcare, and other “safety net” programs, as fewer people would be reliant on them. To quote Fredrick Douglass, “it is easier to build strong children than to repair broken men”.

In other words America has long been paying the price for our structural inequalities. These costs have just been unfairly ascribed to the very people weighed down by the systems that have failed them, in the largest scale example of victim blaming you will ever see.

Both of these undertakings–building a more just society and a stronger safety net–require not only political will but also large sums of money. America was already heavily indebted before it devoted almost $3 trillion to “managing” the COVID outbreak (if you want to call what the Trump administration has done “managing”). Then there is the stalled stimulus bill that will ultimately need to be passed in some form or another, which will probably settle around $2 trillion.

Believe it or not, none of this spending is actually an economic recovery plan (think jobs programs, infrastructure spending), which itself will also likely be in the trillions. All this spending needed to address a bungled COVID-19 response, combined with the GOPs tax reform bill that is projected to reduce tax revenue by over $1 trillion over the next decade and unresolved long-term structural issues funding Social Security and Medicaid, and America’s fiscal outlook is bleak.

But there is hope. We can pay for the many demands Americans have on their governments. After all our governments are not beasts to be starved, but rather the most important institutions we have in promoting the twin goals of justice and economic dynamism.

The good news is that the GOPs unpopular tax reforms can be undone, and “tax justice”–raising enough revenue to pay for the programs society needs–can be achieved. But it will take an administration that believes in both the ability of government programs to improve people’s lives and in international coordination on tax dodging (because of how easily money can be moved around the world these days). These are two things the Trump Administration is diametrically opposed to.

Because this is a global pandemic, governments around the world find themselves in the same boat–with the demands of their people far outstripping their current abilities to bring in tax revenue. Debt levels have exploded as spending increases and tax revenues shrink. This presents a unique opportunity to engage in truly meaningful action against “base erosion and tax avoidance” (BEDS), one that must not be wasted. Outliers must be treated like pariahs; the global community needs to sanction them until it is proven that white collar crime doesn’t pay.

It may be odd to hear me say it, but generally speaking now is not the time to be raising taxes. At any given moment appropriate fiscal policy is context sensitive and “counter-cyclical“. This is exactly what all this stimulus spending now is for (to prop up the economy during a deep recession), and another reason why the GOPs tax bill was not only regressive but unnecessary (stimulus mostly for the rich during an economic boom).

But if we try to raise taxes now, when we are beginning what is likely to be a prolonged global recession, it could choke off any recovery we might otherwise realize. This is less true of tax reforms that target the wealthy, or just funding the IRS enough to effectively audit wealthy dodgers, but generally speaking this is not the time to be raising taxes, particularly on small and medium sized businesses.

This absolutely does not mean there aren’t meaningful steps to take on taxation. Now is when America must do the heavy lifting of leading the global effort to setup a tax framework that works for the 21st Century by plugging up all the holes. If we can accomplish this difficult task it will be relatively easy to raise not just the statutory tax rate (what the tax code says), but more importantly the effective tax rate (what is actually paid), when the time is right.