“The millionaires and billionaires are doing great under Obama,” Cruz said. “But we have the lowest percentage of Americans working today of any year since 1977. Median wages have stagnated. And the Obama-Clinton economy has left behind the working men and women of this country.”

Cruz is on to something. One key employment statistic known as the civilian labor force participation rate is at its lowest level since the 1970s. This statistic takes the number of Americans in the labor force — basically, those who are either employed or who are seeking employment and divides it by the total civilian population. 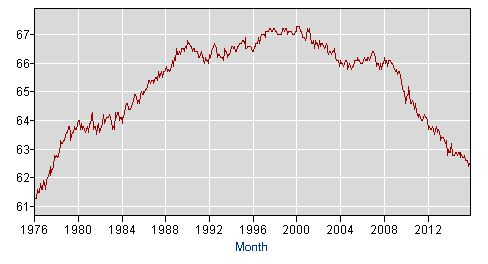 …a notable factor in the decline of the labor-force participation rate is the aging of the Baby Boom generation. As more adults begin moving into retirement age, the percentage of Americans who work is bound to decline.

…there’s another way to read Cruz’s words. He said “the lowest percentage of Americans working” since 1977, which could also refer to a different statistic, the employment-population ratio. This statistic takes the number of people who are employed and divides it by the civilian population age 16 and above.

Here’s a chart showing this statistic over the same time frame: 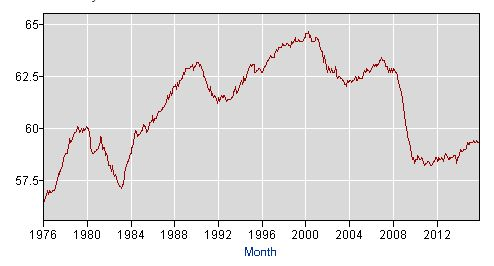 If you exclude the Great Recession, the employment-population ratio was last at its current rate in 1984, not 1977.  So by that measurement, he’s close.

(Note: this blog will not meaningfully address the other major labor market issue raised by Senator Cruz–stagnant wages. Nor will it discuss strategies to alter America’s aging demographic. The primary focus is labor force participation by different age groups, the relationship between older workers staying in the workforce longer and youth unemployment, and how those issues are related to America’s Social Security system.

It is not my intention to spark inter-generational warfare, but rather to point out that a “fix” commonly floated to bring America’s fiscal house in order–raising the Social Security eligibility and retirement ages–could have significant unintended negative consequences).

A declining labor force participation rate is worrisome. Even the more positive statistic (employment-population ratio) is cause for concern.

But as important as what is happening, is why it is happening. Failure to accurately answer this question risks the wrong policy response, which would at best fail to solve the problem and at worst further exacerbate it. The conservative camp would undoubtedly focus on the welfare state and disincentives to work. The liberal camp would probably focus on economic inequality and the resulting lack of opportunity facing many poor, mostly minority youths.

I am not interested in getting into a partisan debate, although my regular readers know which side I generally fall on. What neither side is likely to consider (because it does not fit neatly into either economic narrative) is in what age ranges most of the employment to population ratio change has taken place. To shed some light on this, lets look at a recent analysis done by the Bureau of Labor Statistics (The BLS numbers use the 16 and older employment-population ratio definition. In the interest of full disclosure, I work for the BLS, but not in any employment statistics capacity. Furthermore, the views expressed in this blog are my own, and are not the views of the BLS).

The change in labor force participation seems to have been driven primarily by:

In fact, the decline of prime working age labor force participation (say 25-55) over the last 20 years has been quite small.

It is true that once you get to the older age brackets (especially 60+), the group represents a smaller percentage of the overall population (see Table 1), so you cannot compare different groups percent changes directly. But even factoring in percentage of the total population, increases in elderly workers have had a significant impact on overall employment. As America’s population continues to get older, it will have an even greater impact:

Furthermore, according to BLS Employment Projections (2014-2024), these age related labor trends are expected to continue into the future:

One could argue that older and younger people generally do not occupy the same job. Sometimes this is true, sometimes it is not. Furthermore, any given firm could have an older person making a lot of money in a position they intend to fill with more than one entry level worker. This is all anecdotal–without doing more research the exact relationship between older and younger workers and job openings is unknown–but surely there is some relationship (probably one that varies greatly by industry).

Next time a politician talks about raising the Social Security eligibility and retirement ages, consider:

Both of these related issues–youth un(der)employment and student loan debt–create a drag on the economy, as younger people delay starting their “adult lives” (starting families, buying homes, etc.). This drag on the economic growth leads to–you guessed it–less job creation. Based on the BLS numbers, we clearly need to make youth employment a greater priority, as ignoring the problem compromises both current and future economic growth.

When we consider raising the Social Security eligibility age, we must consider unintended consequences. To responsibly increase the eligibility age, the government would have to launch a youth employment program. This could offset most (if not all) of the savings associated with raising the retirement age. Perhaps instead of raising the eligibility age, we should consider making social security a needs-based program, eliminating the cap on taxable income, or both. This may not be “fair” to people who have paid the most into the program (or those who have been more financially conservative throughout their lives), but it would make the Social Security system more financially sustainable, without the unintended negative consequences.

America does not  have to enact policies that exacerbate youth unemployment and/or discomfort poorer elderly people in order to save a few bucks. Our strong financial system and global faith in America’s creditworthiness ensures we can continue to finance important programs (for people of all ages) with long term economic implications. But this global faith in America’s creditworthiness is predicated on the belief that we can correctly identify and address our structural economic problems (and thus continue to grow and repay our debts). To preserve this faith, we must work across the partisan divide to responsibly and sustainably address these problems, not recycle stale partisan arguments that are largely unrelated to the problems at hand.

During a March 2008 campaign speech at the National Constitution Center in Philadelphia, Barack Obama said:

Most working- and middle-class white Americans don’t feel that they have been particularly privileged by their race. Their experience is the immigrant experience – as far as they’re concerned, no one’s handed them anything, they’ve built it from scratch. They’ve worked hard all their lives, many times only to see their jobs shipped overseas or their pension dumped after a lifetime of labor. They are anxious about their futures, and feel their dreams slipping away; in an era of stagnant wages and global competition, opportunity comes to be seen as a zero sum game, in which your dreams come at my expense.

Obama then noted the consequences:

When they hear that an African-American is getting an advantage in landing a good job or a spot in a good college because of an injustice that they themselves never committed…resentment builds over time.

Obama’s words ring just as true today, as highlighted by the Public Religion Research Institute’s 2015 American Values Survey. While the majority of Americans believe that historically marginalized groups face “a lot of discrimination”, there is a large portion of all Americans (25%) who believe whites face “a lot of discrimination”. Predictably, certain groups (Republican, Tea Party) hold these views even more strongly.

These perceptions fuel the “politics of division”–the “us” versus “them” mentality where “we” are hard workers who bust our butts just to make ends meet, while “they” are lazy “takers”. Of course at the macro level there are examples of “us” and “them” in every race / culture. But the diffusion of news sources and social media “echo chambers” counter this obvious truth, reinforcing the politics of division.

These are not just philosophical considerations, the politics of division has real world implications. By turning issues that affect people of all races (globalization, stagnant wages, social immobility, etc.) into racial ones, people end up voting against their economic interests in the name of cultural / lifestyle considerations. When their economic situation consequentially continues to deteriorate, they double down on their scapegoating, moving further away from the real answers to their problems. And if those 25% of people (who believe that whites face a lot of discrimination) happen to come out and vote in droves, then something that sounds as absurd as “President Trump” could come to fruition.

So how do we counter the politics of division? While no one government program can fix race relations, one obvious program to reconsider–the one that Obama alluded to in 2008 and is before the SCOTUS today—is the current structure of affirmative action systems. I believe an economic class-based system would not only help bridge racial divides, but would also more effectively promote opportunity and social mobility.

Before you deride me for being at best misguided and at worst a racist, consider the following arguments:

A common argument against the current affirmative action model is that colleges pursue “low-hanging fruit”–minority students from good backgrounds who would have gone to college anyways.

The number of minority students accepted through a class-based affirmative action system would be lower compared to the current model (although, due to racial inequalities in income and wealth, a class based system would still disproportionately benefit minorities). However, it is possible that a class based system could actually lead to greater total enrollment by minority groups, by targeting those who otherwise would not go to college.

More research and testing would be needed to determine how a class-based system would impact total enrollment figures among various minority groups.

…one possible theory offered by the analysis to explain the drop is that the perceived cost of college may be the issue at play here. “The rapid price increases in recent years, especially in the public college sector, may have led many students — particularly low-income students — to think that college is out of reach financially,” the report says.

While enrollment for “low income” students of all races has declined, enrollment rates for black students have been increasing:

Graduation rates are still much lower for black students, but affirmative action impacts enrollment, not graduation.

A college degree remains the best investment a person can make in themselves. The issue affecting social mobility is not getting minority students into college, it is getting “low income” students of all races to graduate from college.

Admittedly, affirmative action is only a small part of the solution. But due to its linkages to the politics of division, and that the current model seems to address an problem that no longer exists (low enrollment rates for minorities), affirmative action should be changed to a class-based system.

(The question of how affirmative action should be used for private sector hiring is less clear-cut. Unlike college enrollment, minorities still face many barriers to gainful employment, some of them due to racial bias, although new research suggests this bias could be waning).