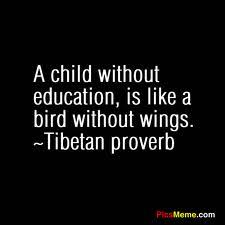 “This learning crisis has costs not only for the future ambitions of children, but also for the current finances of Governments,” says the independent Education for All (EFA) Global Monitoring Report Teaching and Learning: Achieving Quality for All,commissioned by the the UN Educational, Scientific and Cultural Organization (UNESCO).

“Around 250 million children are not learning basic skills, even though half of them have spent at least four years in school. The annual cost of this failure: around 129 billion,” it says, noting that in around a third of countries, less than 75 per cent of primary school teachers are trained according to national standards. Some 57 million children are not in school at all.

“These policy changes have a cost,” UNESCO Director-General Irina Bokova says in a forword. “This is why we need to see a dramatic shift in funding. Basic education is currently underfunded by $26 billion a year, while aid is continuing to decline. At this stage, Governments simply cannot afford to reduce investment in education – nor should donors step back from their funding promises. This calls for exploring new ways to fund urgent needs.”

The report notes that in 2011, around half of young children had access to pre-primary education, but in sub-Saharan Africa the share was only 18 per cent. The number of children out of school was 57 million, half of whom lived in conflict-affected countries. In sub-Saharan Africa, only 23 per cent of poor girls in rural areas were completing primary education by the end of the decade.

Supply and Demand Side Impediments to Education:

As one would expect in a development economics course, education was a recurring topic; was the education-gap primarily a demand-side issue (are parents in the developing world not sold on the advantages of education, perhaps compared to the immediate need for income from child labor), or a supply-side issue (was it a lack of schools, roads, electricity, teachers, etc.)?

Of course, supple-side concerns can perpetuate  demand-side issues. For instance, if a parent does not believe their child will receive an adequate education, they may be more inclined to send their child to work instead of school. Therefore, in instances where there is an immediate need for child-labor income, it is all the more essential to ensure that a viable alternative (adequate education) exists.

According to this UNESCO report, the education-gap is primarily a supply side issue. This is encouraging news; given adequate government funding, development aid, and accountable / transparent governance, the education-gap is not an insurmountable problem. There is not some cultural difference holding back educational goals. Given the opportunity, parents will send their children to school (as proven by inputs from “The World We Want” Post-2015 National and Thematic Consultations).

Similar to using nurses / physician assistants instead of doctors in certain instances to keep healthcare costs down, using a teaching assistant would put less pressure on finding the elusive “quality teacher” (which tend to be in short-supply even in developed countries). Prerecorded classes could be translated into dialects so that traditionally marginalized groups would have access as well.

This hybrid online / in-person model is not a panacea, but it does present a reasonable substitute for quality education given supply-side constraints. It is certainly an alternative education policymakers in developing countries (and poorer areas in developed countries) should explore.

The Role of Good Governance:

Governments should have an interest in delivering a quality education to all children. Under-education has both an immediate ($129 billion lost in global put) and future costs (the report said that ensuring an equal, quality education can increase a country’s gross domestic product per capita by 23 percent over 40 years.).

This normative stance requires a long-term and accountable outlook on governance. It is always easier (and personally beneficial) to embezzle development aid than invest in education. This is one reason why democratic governance plays such an important role in development. Governments must be made accountable to their constituents, otherwise socially beneficial policies will be foregone for personal benefits.

Furthermore, when development aid does not go to its intended recipients, it fuels anti-development-aid sentiments. People in the U.S. often argue “why do we send money abroad when we have social problems at home”? When this aid does not go where it is supposed to go (which to be fair, is fairly often), these people see their views as vindicated. Of course it is not an “either-or” situation; there is no reason why the richest nations in the world cannot reach their 0.7% of GDP aid commitment while also addressing domestic concerns. Development aid is a popular scapegoat, not only because the beneficiaries aren’t “us” but “them”, but also because people chronically overestimate the amount we spend on official development aid (ODA).

ODA should be conditional on “good-governance”, including independent oversight of aid-delivery. It is fair for those paying for the aid, and those receiving it. Any government that uses the “national sovereignty” excuse to deny independent oversight of aid-delivery should be found in violation of Article 2.1 of the International Covenant on Economic, Social and Cultural Rights, which states:

“Each State Party to the present Covenant undertakes to take steps, individually and through international assistance and co-operation, especially economic and technical, to the maximum of its available resources, with a view to achieving progressively the full realization of the rights recognized in the present Covenant by all appropriate means, including particularly the adoption of legislative measures.”