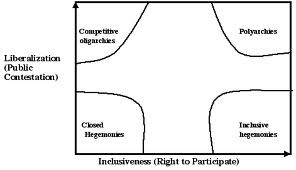 During China’s annual address to the UN General Assembly, Foreign Minister Wang Yi had an interesting message for the international community:

Inclusive, participatory politics are a foundation of modernization theory / a human rights based approach to development. Coming from a Chinese official these words ring hollow, as they were delivered while the Chinese government cracked down on pro-democracy protestors in Hong Kong:

In a significant escalation of their efforts to suppress protests calling for democracy, the authorities in Hong Kong unleashed tear gas and mobilized riot police with long-barreled guns Sunday to disperse crowds that have besieged the city government for three days. But thousands of residents wielding only umbrellas and face masks defied police orders to clear the area.

At the heart of current protests are provincial elections in Hong Kong. The Chinese government is allowing these elections to take place, but will only permit certain candidates to run. To their credit, and against great odds, protestor’s have defied calls from the Communist Party to end their protests.

It has become clear the people of Hong Kong are willing to defy authority in their attempt to secure political rights. The protests have naturally gained much international attention, and have put the usually shrewd Chinese Communist party in a difficult position.

Polyarchy and a Context Sensitive Approach to Development:

Robert Dahl, one of the most influential political scientists of the 21st century, would probably consider Hong Kong an “inclusive hegemony”. Technical terms aside, even the casual observer should realize that, as they stand, Hong Kong’s elections would not represent a real democratic exercise (and hence the protests).

When it comes to human rights and poverty reduction, the Chinese experience is perplexing. Since 1981, the number of people in the world living in “extreme poverty” (less than $1.25 PPP / day) has fallen by 500 million people; excluding China, this reduction turns into an increase of 100 million people. One could certainly argue that the UN is not in a position to lecture China on the finer points of poverty reduction.

But China’s experience with development and poverty reduction cannot easily be replicated. Economic development is always context sensitive, and the least developed regions in the world (specifically Western / Sub-Saharan Africa and the Middle-East) must develop from starkly different contexts than China has.

China is generally a homogenous, stable country with a strong central government that effectively meets peoples basic needs. Generally speaking, modern day Western / Sub-Saharan Africa and the Middle-East couldn’t be more different; sectarianism / tribalism run rampant, and governments are corrupt and ineffective at providing even the most basic services. This combination results in instability, insecurity, and high poverty rates.

Any meaningful attempt at “South-South cooperation”–using the experiences of past development efforts when drafting new ones–would quickly identify these difference. While China’s economic development has been a remarkable success story, it would also be impossible to reproduce in today’s least developed countries (LDCs).

Furthermore, there are limits to the growth China’s can realize from it’s political economy model. While extreme poverty has dropped in China, the average Chinese person is by no means “wealthy”. The Chinese government has proven itself to be incredibly adept at picking the “low hanging fruit” of economic development. But it is widely accepted, even by Chinese leadership, that future growth and development requires a shift from export-based / state-sponsored growth to consumer-demand / market based growth.

The question is whether  this type of growth is possible in a quasi-capitalist, authoritarian country. Perhaps China will continue to be the exception to the rule, and become a highly developed nation without extending the political freedoms many of it’s people crave. I have my doubts, and recent slowdowns in China’s economic growth may affirm my beliefs, but admittedly a longer-term perspective is needed to see whether China’s economic slowdown is a symptom of structural flaws in its political economy or not.

It is worth noting that China is far from an outlier / renegade nation (such as North Korea). China is not, for instance, Egypt or Syria–countries whose leaders greeted pro-democracy protestors with indiscriminate slaughter. Furthermore, modern day China is not 1989 China; these are not the Tiananmen Square protests, times have changed and I am fairly certain the Chinese central government will not resort to violence in order to break up the protests.

China generally works within the international community, and is sensitive to negative perceptions that may affect its economic growth. The Communist party has proven itself to be in-tune with the needs of it’s people–whether this is out of some sense of good governance or a survival tactic is certainly open to debate.

It is difficult to rank countries based on their human rights records; human rights violations are interconnected and their consequences difficult to quantify. One such organization that attempts to rank countries, the International Human Rights Rank Indicators, has China ranked 48/216. This rank is below most of the world’s wealthiest countries (which has a lot to do with a governments ability to fulfill economic and social rights), but ahead of many of the worlds poorest / most oppressive regimes; I would say this is a reasonable ranking.

The ability of the worlds LDCs to develop, and of China to continue to develop, should be of great concern even to those in the “developed” world. If the Great Recession has proven anything, it is that “financial innovation” is not a sustainable path to prosperity. Wealthy countries need new markets to export their goods–they need people in poorer regions to obtain greater purchasing power. This means the international community must be clear-eyed when assessing the merits and limitations of the Chinese growth model.

For the world’s LDC’s, I am fully convinced that a human rights based approach to development is needed. The Post-2015 development agenda–with a human rights and a context sensitive approach to development at its core–is being designed with the world’s most impoverished in mind. I am cautiously optimistic that this second iteration of the MDGs will make a meaningful impact in the battle to end extreme poverty and expand human dignity in the worlds poorest regions.

China will not take outside advice when determining its future policy choices. China does not need international economic assistance, so there is no mechanism for implementing outside advice (regardless of its merits). If democratic gains are to take hold in China, it will require a combination of internal pressure (protests) and a continued slowdown in China’s economic growth.