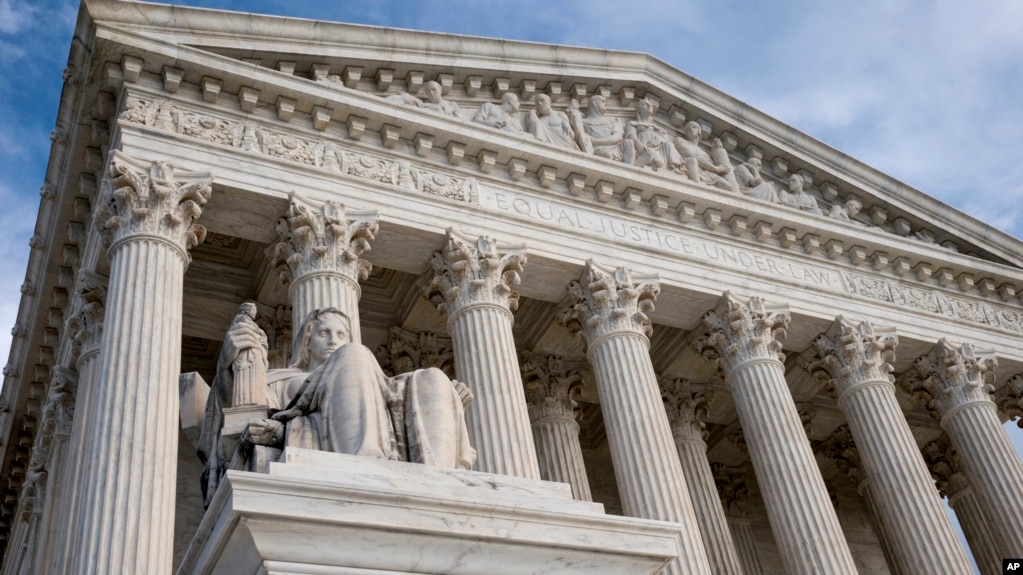 The Supreme Court of the United States, with “Equal Justice Under Law” etched into the front.

“The [Wednesday, September 5th] House hearing [with Twitter and Facebook Executives] was interrupted by Laura Loomer, a conspiracy theorist who has been banned from major social media sites. She shouted that Dorsey was lying, accusing him of banning conservatives and saying Twitter was going to help Democrats “steal” the November elections.” [Quoted article]

While it is easy to dismiss conspiracy theorists, I do not think these are the just the ravings of a madwoman. I think a lot of ardent Trump supporters buy into the idea, promoted by the President himself, that should the GOP lose Congressional majorities in the midterm elections, that those seats would have been “stolen” by some wide ranging conspiracy encompassing traditional media, social media, and China.

The idea that there is some conspiracy to “steal elections” is utter nonsense which only serves to widen the country’s already massive partisan divide. This is not just my opinion–only 13 of the 24 states’  attorneys generals invited to the Justice Department’s meeting on “social media bias” even bothered to attend. Furthermore, the meeting ended up focusing on privacy concerns on social media, not political bias; when the adults get together they speak about the real issues, not baseless allegations.

Allegations like these are part of the Trumpian playbook; get out there early and cry foul, so if an outcome you don’t like comes to pass, you can say “see, I told you it was rigged”. Trump did this throughout his campaign, and it has continued into his Presidency.

This is a sad, if unsurprising, abdication of accountability by Trump. It is a childish excuse, commonly employed by those who are unable to accept loss in a dignified manner. You would not (or should not) accept such excuses from your friends on trivial matters, so why would you from elected officials on much more consequential ones?

Yes, Twitter made a mistake with its algorithm. Yes, this mistake caused certain profiles to become less accessible by failing to auto-suggest them when a user began a search (they were still returned in search results). Twitter has owned up to this mistake and fixed it. To err is human; when mistakes inevitably do occur, the best course of action is to admit to and rectify them, as Twitter has done.

It should be noted that this was a relatively benign mistake that occurred well before the election cycle got into full swing (July, elections in November); it is not something that will impact the outcome of any of the midterm elections.

There is no rule book for finding the “right balance”, as a nation we are learning as we go. Having said that, false political information is an actual threat to the integrity of our elections (as opposed to baseless accusations of bias). If anything social media companies should probably be erring on the side of too much restriction of potentially false information, not too little. Note that false information (or “fake news”, if you must) does not include opinion pieces that present themselves as such, like Normative Narratives, but rather false information being presented as fact.

Trying to find the proper limits on free speech is not a new problem, social media is just the latest (and probably most complex) iteration of this ongoing debate. Public safety has always had to be balanced against freedom of speech (“clear and present danger”, you can’t yell “FIRE” in a crowded movie theater)–it is baked into the First Amendment itself.

Technological improvements often outpace our elected officials ability to regulate them. This problem is especially prevalent in today’s hyperpartisan political environment, with its resulting legislative gridlock. Taken together, all this means it could take several imperfect attempts in either direction–to much censorship or too little–before we reach that elusive “proper balance”.

The reality that it is a long road to reaching this “proper balance” is a feature of democratic governance that we must accept. What we should not accept is the deliberate marginalization of voters that results from political and racial gerrymandering. “[Gerrymandering] in U.S. politics, [is] drawing the boundaries of electoral districts in a way that gives one party an unfair advantage over its rivals.”

Unfortunately, even when a state’s ruling is affirmed by a Federal court, the end result does not always restore justice. Recent events in North Carolina are a case in point:

A U.S. court panel has ruled there is not enough time to recast North Carolina’s congressional maps ahead of the November elections even though it found the Republican-constructed lines were illegally drawn for partisan purposes.

“North Carolina will have to suffer again under yet another unconstitutional Republican law that silences voters, divides our state, and undermines our democracy,” Wayne Goodwin, the state’s Democratic Party chairman, said in a statement. The party was a plaintiff in the suit.

The North Carolina dispute centered on a congressional redistricting plan adopted by the Republican-led legislature in 2016 after a court found that Republican lawmakers improperly used race as a factor when redrawing certain U.S. House districts after the 2010 census.

The Republican lawmaker [Rep. David Lewis, a Republican member of the North Carolina General Assembly] in charge of the plan said it was crafted to maintain Republican dominance because “electing Republicans is better than electing Democrats.”

First of all, when it comes to the democratic process, there is no “better” party. Policy differences of course exist, but these are secondary to making sure the democratic process plays out as fairly and transparently as possible; any “patriot” that puts party ahead of democracy needs to take a long look in the mirror. Now back to the issue at hand–gerrymandering.

In the past decade, North Carolina lawmakers have been found to have illegally drawn voting districts based on both racial and political considerations (in fact they directly and unapologetically replaced their racially unconstitutional map with a politically unconstitutional one). It is hard to argue that there were not some truly stolen elections in North Carolina. Unfortunately this problem is not limited to North Carolina (or the Republican party–Democrats do it too).

Which party gerrymandering benefits more really just depends on who the majority is when it comes time to redraw a state’s voting district lines (“redistricting”). It is worth noting that because of demographic trends (liberals tend to live in more concentrated cities), gerrymandering has more potential benefit to the GOP.

The larger issue is not which party gerrymandering benefits more, but rather that it should not be a tool to benefit either party. Hopefully changes to the redistricting process (or possibly even more significant changes to how we elect our representatives), in addition to a more definitive U.S. Supreme Court ruling, can eradicate this plague on our democracy. It is, however, certainly an uphill battle.

When the Democratic Process Plays Out Fairly, the Means Justify the Ends

When the democratic process plays out fairly and transparently–two qualifications many elections, including the 2016 Presidential election, do not meet–the means justify the ends. Elections do have consequences, but they should never be predetermined, or even allowed to be titled to one sides favor.

All that should matter is the principle of one-person, one-vote. Now the Electoral College purposefully distorts this principle in Presidential elections, but that is another topic for another day. Regardless of your opinion on its current merits, the Electoral College was created intentionally as one of the compromises that birthed our great nation; it is enshrined in the U.S. Constitution until an amendment is passed that says otherwise.

Gerrymandering, on the other hand, is a bastardization of America’s democratic process. It is not a stretch to say that our Founding Fathers did not intend for gerrymandering to be a feature of our democratic process. This problem has only become more acute as software is developed to help lawmakers more effectively “pack” and “crack” districts. As with the issue of free speech on social media, technological improvements in gerrymandering have outpaced our government’s ability to regulate it.

By continuously punting on the issue of partisan gerrymandering, the U.S. Supreme Court has been negligent in upholding the words carved into its facade–“Equal Justice Under the Law”.