Tax reform is not “sexy”, there is no getting around this fact. It is, however, a very important issue, as every government program is funded either by tax dollars or debt. While the specifics of tax policy may be difficult to comprehend, almost everyone has their own beliefs on taxation and the role of government.

Looking at these preferences, the majority of Americans believe the government does not do enough to help poor and middle class people. Relatedly, a full three quarters of Americans feel that the wealthy aren’t paying their fair share of taxes.

All these proposed ideas would reduce taxes paid by the wealthy, compromising the government’s ability to further help poor and middle class people. So the question is, if these ideas are so unpopular, how is Trump selling them to the American public?

For some, it is enough to say that lower taxes will promote growth, increase employment, and pay for themselves. People who drink this “supply-side” Cool-Aid are outliers, and notably the vast majority of economists disagree with these claims. But remember, we are talking about many of the same people who disagree with 97% of climate scientists on climate change, so this is actually a consistent (if not irrational) repudiation of “experts”.

Most reasonable people, however, believe what the overwhelming majority of experts in a field conclude. For these people, support for Trump’s plan likely comes from being told they will receive a “massive” tax cut. But when you look at it, the “massive” cuts in Trump’s plan are reserved for those with the highest incomes.

Consider the distribution of income tax cuts, as shown on the table below. 77% of the cuts go to people earning more than $143,100 a year. That is hardly the “middle class”. 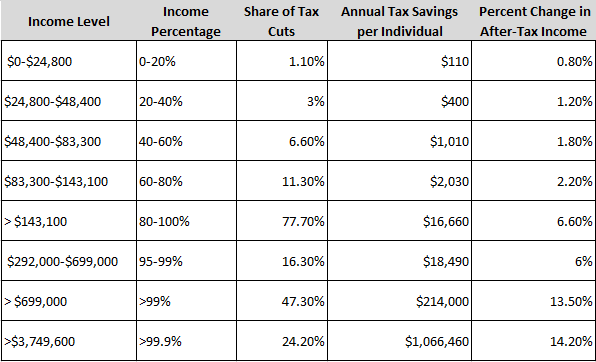 Trump’s plan would increase our national debt by well over a trillion dollars. The IMF has warned the plan will increase inequality and will not lead to higher growth. Wall Street is betting it will lead to greater investments in automation, not workers. The Fed has even waded into the debate to issue a rare warning, saying the proposed plan could lead to high inflation.

For all these negatives, middle class earners will only get a small tax cut, if that. Treasury Secretary Mnuchin admitted some middle class earners may not get any cut at all. This is coming from the man who also said it is “hard to create a system where you’re not going to also cut taxes on the top 10 percent“. Maybe if you are a derisive elitist with zero consideration for societal well-being, who has no business governing, it is difficult to imagine not cutting taxes for the wealthy. For most people, it is extremely easy to imagine.

So Trump’s plan is unpopular, and those who support it are either irrational, have been misled, or are wealthy and likely to benefit personally. Just like with healthcare, the GOP has no tax reform plan that works for the vast majority of Americans; hopefully its tax reform efforts will meet a similar defeat.

The Case for Higher Top Rates

Remember, Trump’s plan sets three tax brackets for individuals, down from the existing seven. While the U.S. tax code has become overly complicated due to deductions and loopholes, the complicating factor is not the number of income tax brackets. Like any misdiagnosis, reducing the number of tax brackets would not solve any problems, and would likely make the situation worse.

Republicans in Congress plan on including a fourth higher bracket in their proposal, but this is not enough. There should be even higher brackets and rates for people with 7 and 8 digit incomes.

After a certain point, the higher your income, the less it is connected to working harder, and the more it is related to the risks one takes and the carefully constructed, trade-based global economy in which we operate (infrastructure, government R&D, international peace and trade rules, strong judicial systems, educated workforces, relatively prosperous customer bases, etc.). Notably these characteristics are all, to varying degrees, financed by tax revenue.

I can already hear people moaning at this point and calling me a socialist, so allow me to clarify with an example. Take someone who manufactures clothing. Decades ago, the owner of this company would more or less be constrained to selling his or her goods domestically. Despite working very hard, their overall earnings were capped (at least by today’s standards). Today, the same person, putting in the same amount of work, can sell their goods all over the world through the internet, earning a lot more money. The work these two owners from different eras put in is roughly equivalent, but the modern day entrepreneur can potentially earn a lot more. In fact, this is half of the story of increasing extreme global inequality.

What about my other point, about these systems being financed to varying degrees by tax revenue? Well this is certainly true of the internet (whose origins were in defense research). It is also true of all of the spending that promotes international peace and fair trade practices (defense spending, development aid, contributions to international organizations like the WTO, etc.).

While the risks people take should be rewarded, the context in which wealth is earned should not be ignored. This is not to say “you didn’t build it” or “you didn’t work hard”, it is simply acknowledging that outside factors play a role in how much wealth one can amass. Ignoring this reality does not make it go away, but it does risk underinvesting in making sure it continues into the future.

I think that much of the opposition to higher tax brackets comes from misunderstanding how marginal tax rates work. When you enter a higher bracket, only the amount you earn over the higher threshold gets taxed at the higher rate.

In recent history, before the Reagan era tax cuts, top income tax rates were around 50%. This seems like a reasonable number if not for its roundness and inherent fairness, but the exact optimal number of brackets and rates is not what’s most important. More important is recognition by people across the political spectrum that the wealthy must pay their fare share of taxes. Based on the survey results cited earlier, most people already do share this belief–it is well past time their elected representatives acted on it.

The tax code should be used neither to venerate the wealthy as infallible job creators, nor to vilify wealth so much as to stifle innovation. Simply put, the tax code must allow us to adequately invest in the very systems which enabled America to become the wealthiest nation in the world in the first place. Anything else is a short-sighted failure of governance.

“Back to the Future” (With Some Help From Our Friends)

Trump’s base often talks about “Making America Great Again”. To a small minority, this is a thinly veiled embrace of our country’s racially charged past. To others, I’d like to think most people, making America “great” is about (re)creating an economy that rewards anyone who is willing to work hard.

So how can we make sure that, as a country, we can afford to make the investments needed to get back to this “Golden Age”? Not surprisingly, some of the answers lie in the past; America has historically had both more income tax brackets, and higher tax rates for top earners. These were the good old days many low-tax advocates are pining for!

There is nothing uniquely American about these higher historic rates either. According to the Organisation for Economic Co-operation and Development (OECD), “top personal income tax rates in rich nations had fallen to 35 percent in 2015 from an average of 62 percent in 1981.” To put a bow on an earlier point, this is the other half of the story of increasing extreme global inequality.

Now admittedly some things have changed in the past few decades. The rise of information technologies has led to irreversible changes in financial markets. When people can move their money around the world instantly with the click of a mouse, it is important to have some level tax coordination between countries in order to fight tax evasion (in its many forms). In today’s globalized world, countries and international institutions such as the OECD must work together to ensure the ultra-wealthy are not getting a free ride.

If America wants to be able to adequately invest in the very systems that made and continue to make it great, and if we want to be able to give working class people a tax cut without greatly increasing our national debt, we must hold the wealthiest Americans economically accountable.

Some elements of the tax bill have changed since I originally wrote this blog, but these were marginal changes. At it’s core, this bill is still the regressive piece of legislation it always was.

According to the non-partisan Congressional Joint Committee on Taxation, even accounting for supposed growth this bill will “unleash”, it will still increase the deficit by 1 trillion dollars over the next decade. That shortfall will ultimately be paid for by reducing spending on popular government programs, and forestall the conversation on any new government programs (think education, healthcare, infrastructure). The only hope is that the Senate and House are unable to reconcile their bills and pass a unified one, but this is unlikely–if there is one thing most conservatives Congressmen believe in, it is making the rich richer and the poor poorer.

For all the talk of how damaging Trump has been to this country, taking a longer view he will ultimately be a flash in the pan. This tax bill, should it pass, would have a much larger negative impact on our country, ultimately leading to lower social mobility for decades to come. The last major tax overhaul persisted for over 30 years–this country (literally and figuratively) cannot afford to have this bill become our new tax code.

The House and Senate reconciled their tax bills, with the final version being signed into law by President Trump. The only silver-lining is that this massively unpopular law may lead to a Democratic resurgence. However, Republicans will do their best, via repressive voting laws and gerrymandering, to stop this from happening.

The American people cannot afford this tax law on the books for a prolonged period of time.  It will leave us further in debt, while compromising our ability to further invest in our people and our infrastructure. We now turn to the 2018 and 2020 elections as a barometer for just how fed-up the American people are by the bait-and-switch “populism” of Trump and the GOP.