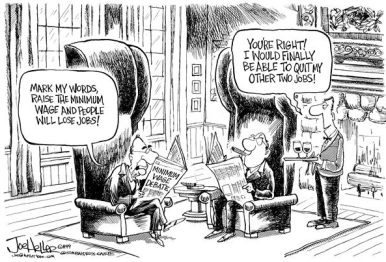 The Seattle City Council has unanimously approved an ordinance Monday to phase in a $15 hourly minimum wage — the highest in the nation.

Drafted by an advisory group of labor, business and nonprofit representatives convened by Mayor Ed Murray, the ordinance phases in wage increases over three to seven years, depending on the size of the business and employee benefits.

The issue has dominated politics in the liberal municipality for months. Murray, who was elected last year, had promised in his campaign to raise the minimum wage to $15 an hour. A newly elected socialist City Council member, Kshama Sawant, had pushed the idea as well.

“This legislation sends a message heard around the world: Seattle wants to stop the race to the bottom in wages and that we deplore the growth in income inequality and the widening gap between the rich and the poor,” Councilmember Tom Rasmussen said.

The increase in minimum wage comes amid a national movement from low-wage workers for higher pay, and a more livable minimum wage.

An individual working full time–$40 hours a week for 52 weeks at $15/hr–would earn a pretax income over $31,000 (or $62,000, for a two minimum wage income family) enough to put most U.S. families over the official poverty line. Furthermore, such an income level would lead to substantial savings on welfare programs, pushing many households into positive net tax brackets (taxes owed minus transfer payments) while unlocking public resources for other deserving causes (investments in human capital, infrastructure, R & D, etc). One would also expect a drop in crime rates (and perhaps the ability to save money throughout the law enforcement and criminal justice systems), as it becomes easier for people to earn a comfortable living legitimately.

A $15 minimum wage is an ambitious plan, as a proponent of economic populism I hope it is a resounding success. People from both sides of the political divide will be paying close attention to Seattle’s socioeconomic indicators–specifically, poverty rates, unemployment rates, crime rates and economic growth rates–in order to support their position on minimum wage laws. It is notable that businesses will have a period of between 3-7 years to phase in higher wages, which should temper any potential adverse economic shocks resulting from this policy.

When it comes to socioeconomic outcomes, there are too many variables to come to definitive conclusions by running experiments; even sophisticated randomized control trials and cohort studies have their limitations. Economics is always context sensitive, and while it may not be fair to extrapolate lessons learned from Seattle across the country, this will inevitably occur. And in these extrapolater’s defense, the only way to see how a living minimum wage works is to test it out on a sufficiently large scale. Seattle has become this testing grounds, and based councilman Rasmussen’s comments, the city welcomes this distinction.

Proponents of this minimum wage hike will likely frame it as the harbinger of a golden age of shared prosperity, while its critics will foretell of rampant unemployment and economic decline; the truth invariably lies somewhere in the middle. For what it’s worth, in the context of the modern American economy, I believe the results will be much closer to the former rather than the latter.

11 thoughts on “Economic Outlook: A Living Minimum Wage in Seattle”