There has been lots of talk in recent years about deficit reduction in America. The focus of this post is not to call into question the need for deficit reduction, or to talk about the tax reform side of deficit reduction. This post focuses on where we can most responsibly cut government spending, specifically comparing entitlement and defense spending. 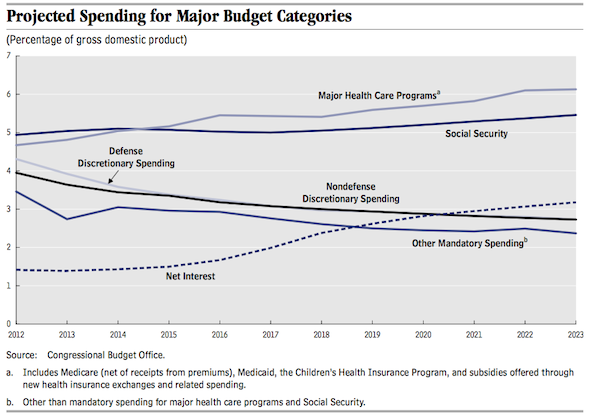 Sen. Marco Rubio, R-Fla., gave a speech about foreign policy at the conservative American Enterprise Institute Nov. 20. After his speech, a Floridian in the audience asked him a question about how to convince Americans to support consistent defense spending.

“The reason we have a national debt is not because of defense spending. What is driving our long-term debt are Medicare and Social Security programs that are structured in unsustainable ways.”

Rubio didn’t quantify the role of defense in our national debt or specify a timeframe, he simply said that debt isn’t due to defense spending.

But it’s a bit too simplistic to let defense spending entirely off the debt hook.

“It is incorrect to say our current debt has nothing to do with defense spending, because we spend a lot of money on national defense every year, and we have large deficits — therefore defense spending is one of the causes of our debt increase,” said Josh Gordon of the centrist Concord Coalition.

The Congressional Budget Office predicts that spending as a percentage of gross domestic product for entitlement programs such as Medicare and Social Security will grow much faster than defense. Defense spending will also grow, but at a far slower rate.

Dean Baker, a liberal economist at the Center for Economic and Policy Research, argued that Social Security can’t drive the debt.

“Under the law it can only pay benefits insofar as it has money in the trust fund,” he said. “This means that it cannot possibly spend more than was collected in Social Security taxes.”

So what’s the solution to reducing our debt?

“Reversing the upward trajectory of the debt will require taking a look at ways to control health costs and reform Social Security,” said Jason Peuquet at the Committee for a Responsible Federal Budget. “But that doesn’t mean other savings can’t play a vital role. Reforming the tax code to raise more revenue and reducing other spending will be vital elements in actually getting the debt under control.”

For two decades, the U.S. military has been unable to submit to an audit, flouting federal law and concealing waste and fraud totaling billions of dollars.

The Defense Department’s 2012 budget totaled $565.8 billion, more than the annual defense budgets of the 10 next largest military spenders combined, including Russia and China. How much of that money is spent as intended is impossible to determine.

The consequences aren’t only financial; bad bookkeeping can affect the nation’s defense. In one example of many, the Army lost track of $5.8 billion of supplies between 2003 and 2011 as it shuffled equipment between reserve and regular units. Affected units “may experience equipment shortages that could hinder their ability to train soldiers and respond to emergencies,” the Pentagon inspector general said in a September 2012 report.

Because of its persistent inability to tally its accounts, the Pentagon is the only federal agency that has not complied with a law that requires annual audits of all government departments. That means that the $8.5 trillion in taxpayer money doled out by Congress to the Pentagon since 1996, the first year it was supposed to be audited, has never been accounted for.

“The Pentagon can’t manage what it can’t measure, and Congress can’t effectively perform its constitutional oversight role if it doesn’t know how the Pentagon is spending taxpayer dollars,” Coburn said in an email response to questions. “Until the Pentagon produces a viable financial audit, it won’t be able to effectively prioritize its spending, and it will continue to violate the Constitution and put our national security at risk.”

No competent economist can, in good faith, argue that we do not need entitlement reform in the long run. However, entitlement spending occurs in the context of increasing inequality, decreasing social mobility, and a divergence of wages from productivity. Furthermore, Social Security has been wildly successful when compared to private retirement plans (which are subject to financial market volatility), prompting politicians and economists such as Paul Krugman to advocate for Social Security expansion.

In terms of counter-factual analysis, one could argue that many of the problems mentioned above would be much worse if opponents to the safety-net had their way. So called “automatic stabilizers” have greatly reduced poverty and human suffering in the wake of the Great Recession. The edict of “expansionary austerity” has failed miserably in Europe. As Keynes theorized, government spending plays a vital role in making up for the aggregate demand shortfall in a recessed economy.  Stimulus spending is important both for the people receiving it as well as for the economy as a whole. As important a goal as entitlement reform is in the long run, it is equally irresponsible to demand it occurs NOW NOW NOW! In the short run we do not need austerity, we need stimulus spending.

Defense expenditure is another story–it takes place largely in the context of a lack of a direct threat to American national security. Al-Qaeda has been able to successfully attack us once, although in fairness a critic could certainly invoke the same counter-factual analysis I mentioned before to explain this. However, Americas military overreach also fuels resentment abroad, with a questionable net effect on our national security. Defense spending also takes place in an unaccountable fashion, as highlighted by the comprehensive Reuters report. You may not agree with safety net spending in principle, but at least the money is accounted for.

America can reduce it’s military expenditure without compromising global security, by re-balancing spending vis-a-vis our allies (a topic I have gone into in depth here at NN in a series called “The End of Team America World Police“). There is no such re-balancing when it comes to American entitlement spending–it is a responsibility that is ours alone to bare.

Not every dollar of government spending is equal–a reason why indiscriminate spending cuts such as the sequester are such a bad idea. America’s defense budget would be bloated even if every dollar was accounted for; in the context of the social issues facing present day America and unaccountable defense spending, it is unconscionable.

2 thoughts on “Economic Outlook: Quantitative and Qualitative Differences in Entitlement and Defense Expenditure”