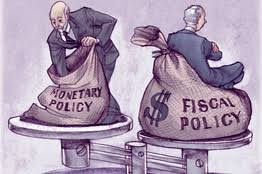 Paul Krugman does a nice job of explaining why unprecedented monetary expansion (“quantitative easing”) has not really moved the needle in terms of reducing unemployment and increasing aggregate demand.

It would be prudent to remind the reader that there has been very little counterfactual analysis of the Feds policies since the Great Recession began (that I am aware of). The situation would almost certainly be worse, higher unemployment and deflation, had the Fed failed to act in the way it is. If you would like to read further on the downward spiral of debt, austerity and deflation in a depressed economy, Irving Fischer wrote on the subject following the Great Depression in a way that is both easy to understand and still as relevant today (perhaps even more-so given how much less politically charged expansionary monetary policy is post-gold standard).

A liquidity trap is a situation when slashing interest rates on government bonds to near zero percent is insufficient to provide enough credit to allow the economy to produce at full productive capacity. Investors would rather invest in safe government assets with almost no yield then invest in private markets.

I believe a liquidity trap is in itself justification for expansionary fiscal policy. It is basically investors saying to the government, “here, we don’t want to invest our money, so do it for us and just promise to pay us back in the future, don’t even worry about the interest”. But fiscal policy, which originates in the House of Representatives, is politically charged (especially when a government is already highly indebted, then every spending program comes under close scrutiny).

Monetary policy, on the other hand, is much more politically isolated. It originates within the Federal Reserve, which is staffed with economists who understand economics better than politicians. The Fed began by cutting rates, hoping to stimulate aggregate demand.

Once this conventional monetary policy failed, unconventional means were taken; the Fed is buying assets on a large scale, expanding the monetary base. The Fed has pledged to continue to pursue expansionary monetary policy by buying assets on a monthly basis until either the unemployment rate falls below a certain level (I believe 6.5%) or inflation rises above a certain level (I believe 2%).

The Fed made this announcement to try to change people’s expectations. Since you cannot cut nominal interest rates below zero percent (the “Zero Lower Bound”), the Fed hopes to stimulate demand by making people think that in the future inflation will be higher than it is now. If money is worth less in the future, then people will want to spend it now while it is worth more. More spending stimulates the economy and reduces unemployment.

So why has this policy been ineffective? Well, as I said before, I am not so sure it has been—certainly the situation would be worse right now, not only for America but for the rest of the world which overwhelmingly relies on dollars for international transactions.

But as to why expansionary fiscal policy would be unquestionably more effective, Professor Krugman hits the nail on the head:

“I’m not claiming that there is nothing the central bank can do; but as I’ve tried to explain before, monetary policy can, for the most part, gain traction under current circumstances only by changing expectations about future actions (and changing them a lot). Meanwhile, fiscal policy has a direct, current effect on the economy, which easily trumps attempts to move the economy by changing the Fed’s messaging.

Sorry, guys, but as a practical matter the Fed – while it should be doing more – can’t make up for contractionary fiscal policy in the face of a depressed economy.”

Fiscal policy can stimulate AD directly by increasing either G, C, or I depending on how the program is designed.  Monetary Policy, on the other hand, has a much less direct effect. It tries to incentivize people to act a certain way (increase C or I), but people do not always act “rationally” in the economic sense. Sometimes people are so risk averse that even reducing the yield on an investment does not reduce the demand for this investment (particularly in times of economic uncertainty, when I would argue investors tend to become more risk averse).

Also, there is inherently less scrutiny in exactly how monetary policy works. While it is true that some portion of fiscal expansion may be used inefficiently, it is much more tractable than monetary policy.

Monetary policy stimulates AD, but it can also feed into financial bubbles. By providing low interest loans to banks, the Fed is making a leap of faith that the money will be spent wisely. The money should be going to helping people restructure underwater mortgages, or generally providing low cost financing, freeing money for people to spend and stimulate demand. And to a certain extent it is does, but it can just as easily be spent in other less egalitarian ways. If this money goes to Wall St.  investments, the gains will be realized almost entirely by the wealthy.

Evidence exists that this is happening—unemployment remains stuck while financial markets have reached record highs. Securitization, which became taboo after the financial crisis hit, has began to become common practice again. Without meaningful financial reform, the Feds policies could be fueling the next asset bubble.

The Fed has maintained it is keeping a close watch on how its money is being spent, and given the suffering caused by the Great Recession I’m sure it is, but there is only so much it can do. The Fed cannot possibly micromanage how all of its “cheap money” is being spent. The Fed could try to only lend to more people-friendly institutions, such as “credit unions”, or establish mechanisms to lend directly to people and small businesses, but up until this point has either has not or cannot do so (either due to its mandate or due to insufficient manpower for such oversight).

So expansionary monetary policy has kept the recovery from not being worse than it is (or not being a recovery at all), but it has predictably fallen short of its intended goal. It needs to be complimented by expansionary fiscal policy. That’s not to say that there are no inefficient programs that can be made to more efficient–there almost assuredly are. The stimulus-advocate policymaker should have concrete examples of how resources can be used more effectively, if he has any hopes of convincing his austerity minded counterpart of coming to an agreement. Policy, like markets, requires both competition and coordination to be made as efficient as possible.

The Fed should not reverse course now, but should ensure proper oversight for its policies. The Federal government, on the other hand, seems to be slowly moving from austerity to stimulus. Will common sense and text-book macroeconomics prevail, or will business as usual continue? Only time will tell.