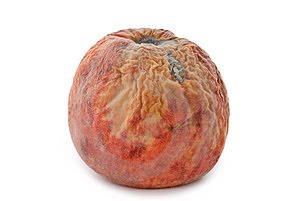 That ripeness refers to the need for Cyprus to diversify it’s economy. Ripeness may not be the right word, as Cyprus is not willingly taking these measures but rather having them imposed, but what else rhymes with Cyprus? (Lack of ripeness, like with this peach, is often a good indicator it is time to throw out said peach, no?)

“Cyprus has a huge banking system — assets around 8 times GDP — based on a business model of attracting offshore money with high rates and good opportunities for tax avoidance/evasion.”

The problem with such a large banking sector is that it creates asset bubbles and leads to  a loss of competitiveness in other sectors. As Cyprus now faces the inevitability of having to diversify its economy away from the banking sector, it faces the difficulty of having wages that are uncompetitive with the rest of its neighbors. It is difficult to be competitive in export industries with a high cost of labor and a high cost of living, as these costs ultimately fall on producers making their goods less competitive. A high cost of living also depresses tourism, as people will choose to go to cheaper destinations.

Transitioning to export based growth is tough in today’s economic conditions, even when labor costs constitute a comparative advantage. This is due to a slump in global aggregate demand, particularly with Cyprus’s current trading partners—EU countries. The EU remains mired with high unemployment and recessions (which are currently hitting Cyprus particularly hard as well), meaning that finding markets for diversified exports would be difficult. The high unemployment (14.7%) and recession conditions (-3.3% GDP growth Q4 2012) mean that Cyprus cannot rely on its domestic markets to buy its goods either.

For these reasons, Cyprus has been reluctant to admit that it must abandon its unsustainable reliance on the financial sector. Cyprus tried to secure an EU bailout by imposing a tax on banking deposits—a measure that Cypriots forcefully rejected. It seems that ultimately Cyprus will have to agree to spare small depositors (average citizens) and force large depositors (who are often foreigners who go to Cyprus as a tax haven) to take a large “haircut”. This would undermine confidence in Cyprus’s banking sector, leading to capital flight.

Cyprus could impose capital controls to prevent capital flight, as Iceland did in a similar situation. This, along with uncertainty of Cyprus’s future in the EU, could mean less FDI (uncertainty is a huge deterrent to investment, especially in the case of a potential EU-exit) which Cyprus will need to diversify its economy due to high levels of debt (84% GDP as of Q3 2012) and high borrowing costs (7% interest rates on long term bonds).

Cyprus is currently at a crossroads, a point summarized nicely by Paul Murphy at FT Alphaville:

“Big depositors in Cypriot banks stand to lose circa 40 per cent of their money here, which has drawn plenty of fury and veiled threats from Russia.”

“Cyprus now has a binary choice: become a gimp state for Russian gangsta finance, or turn fully towards Europe, close down much of its shady banking sector and rebuild its economy on something more sustainable.”

So how are Cyprus’s prospects for economic diversification? Actually, this is a potential bright spot in an otherwise dismal picture (for data, see end of the post):

Cyprus has increased its spending, per person, at all levels of schooling over recent years. There has also been a shift to more advanced technological manufacturing, which could be a growth industry (High-technology exports as % of manufactured exports have risen from around 4% in 1990 to close to 40% in 2010). Energy production, specifically a natural gas field adjoining the Cyprus-Israel border, has been discussed as a potential growth sector.

The problem is such exploration requires large upfront costs and profits will not be realized for at least a few years. Given Cyprus’s high borrowing costs, an immediate bailout is needed—Cyprus simply cannot afford to wait for its economy to diversify, even if it was able to secure the funding needed explore it’s gas fields and / or avoid a Euro Zone exit.

Luckily, Cyprus has been laying down the seeds of economic diversification, but those seeds are not ready to sprout. Economic diversification will be painful, based on the composition of Cyprus’s labor force (agriculture 8.5%, industry 20.5%, services 71% (2006 est.); presumably a large portion of people in the services sector work in financial services).

Compounding the problem; “There’s still a real estate bubble to implode, there’s still a huge problem of competitiveness (made worse because one major export industry, banking, has just gone to meet its maker), and the bailout will leave Cyprus with Greek-level sovereign debt.”

Cyprus needs the troika (IMF, ECB, and EC) to provide emergency liquidity to allow its economy time to diversify. There will inevitably be some growing pains—hopefully harsh austerity is not imposed as a condition for receiving these loans, although recent history suggests it will be. Some internal devaluation will be needed to make Cypriot wages competitive again—something that is politically and socially undesirable (as wages tend to be “sticky”) but an inevitable consequence of losing control of monetary autonomy (being in the EU, Cyprus cannot devalue it’s currency to increase export competitiveness)

Cyprus has been investing in human capital, and already has the infrastructure for export based growth through its advanced system of ports, what is needed is stimulus spending to help mobilize Cyprus’s factors of production away from the financial sector.

Just like a child who knows he must do something he doesn’t want to do, Cyprus initially faced it’s unfortunate reality by trying to return to its security blanket—the financial sector. Ultimately, Cyprus needs to be weaned off the teat of the financial sector—even Russia, the biggest loser if large depositors take a loss, has stated it will not extend financing to Cyprus until it secures troika financing (Cyprus pursued Russian financing as an alternative to a troika bailout, presumably to allow it continue with its unsustainable banking practices, in exchange for preferential exploration rights by Russian firms of Cyprus’s natural gas fields. These talks thankfully did not bear fruit, as they would’ve moved Cyprus in the wrong direction; doubling down on an unsustainable financial sector while compromising its most obvious means of economic diversification–it’s natural gas reserves).

It is important to avoid a Euro Zone exit, as this would undermine investor confidence which is needed alongside troika loans to allow Cyprus to diversify its economy. Ultimately, investors will react favorably if Cyprus admits its financial sector is unsustainable and commits to economic diversification. A sustainable economic outlook will attract investment, especially in an industry as profitable a natural gas exploration, but also in other sectors due to low taxes (10% corporate tax rate in Cyprus–lowest in the EU, can help offset the current high wages in Cyprus and temper the social costs of internal devaluation).

Uncertainty and trying to hold onto an exposed unsustainable financial sector will drive away investors. Everybody can now see that Cyprus will have to force a “haircut” on large depositors. The sooner Cyprus “takes its medicine”, the sooner it can get on the path to sustainable economic development.